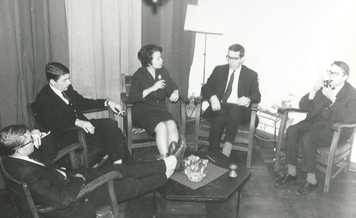 The board of the student union of Veriatas in 1966 with me at the extreme left side
In 1966 I received from the Tourist office of Utrecht a mail of a student, Irmtraud Gallhofer from Vienna who wanted to come to Utrecht for her studies and was looking for a hotel. This mail was send to me because I was de organizer of a Student Hotel in the summer month in the building of the Student Union where I was a board member.
​In 1962 I started my study Sociology at the University of Utrecht. At that time one expected that the study would take 7 years. According to me that was much to long  so I have been rather active in the Catholic student union "Veritas".  I worked for the journal of the union and I started with some friends a student bar  and   I ended up  in the board of the student organization during my fourth study year. We detected that the Union had  already several years a deficit on the exploitation of 15.000 guilders or more. Therefore my took several decisions to change this situation.
At some poimt in time I read in the newspaper that there would be in the summer in Utrecht the European Championships swimming and that there was a lot of interest to come to Utrecht but also that there were not enough sleeping places for all these visitors. I thought that this would be an extra opportunity to earn some extra money to reduce the debts that Veritas had. So I suggested to organize a low budget student hotel in the building which was empty in the summer anyway. We asked help for this enterprise from the Local Government and the army to get the necessary permissions and temporary beds which were placed in the big halls of the building. So as the future managing director of the hotel I received Irmtrauds letter and answered that she would be most welcome. 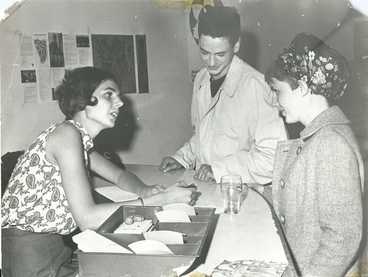 Irmtraud arrives at the baly of the hotel as the first guest
The first guests
The hotel opened its door at the end of July some time before the championships would start. Irmtraud  was  one of the frist guests who arrived in the hotel and she received  all the attention from the receptionist and assistent . I also saw her that day. She was a nice looking elegant young woman, very different from the normal students in the Netherlands at that time who could not present them self as elegant, that was not normal under the femal students. We had a few words, my assistents showed her the way in the building and mentioned that she could get a breakfast in the bar in the morning and that the bar was also open for the guests all day and in the night.
Around the same time a tall person from Vlanders arrived who also liked to stay for some days in the hotel. Because they were the first two guests we spoke with each other in bar in the evening. Irmtraud told me that she was in Utrecht to look for some texts from the archive  for her dissertation.
Our guest from Flanders was a  representative of the extreme independence movement of Flanders. In the bar,that night, he kept us  busy with his  extreme arguments.

Some problems for the managing director
Already the second day of his stay the Flamish guest was robbed in the town from his wallot and lost all his money.  Given this situation he said that its was necessary for him to leave the hotel.  As manager of the hotel I thought that this was not such a good development and offered him to stay in the hotel for free because I thought that his contribution in the bar was more important than the few guilders we missed.
​
The other guest also created a problem because she had lived in dormitories during her secundary school period and thought that this time was over. Besides that, she did not see that there was a place to study in our hotel. She said that she wanted to go to another hotel. I told her that the last issue was simple to solve by offering her the room of the board of the Union which was empty anyway but the other problems I could not solve in the house, we had only dormitaries. However, she insisted that she did not wanted to stay. She had made a nice impression on me so I told her that  Iwould  contact other people asking them if they had somewhere a room free in a student house.  In the end I found one in a female student house. This was not nice for me as a hotel director but at least I could stay in contact what I liked a lot. 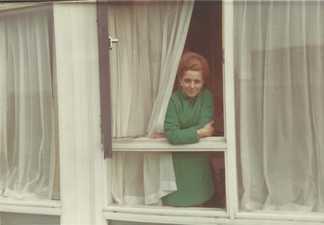 Irmtraud in her new student house
I decided to help
I also helped her with moving. She had a big suitcase and so I offered to help her to get to the place where she could stay.  For some reason we went walking and while walking we started to talk about different issues also about the research she was doing. Irmtraud told that it was a study of a peace treaty made between a governes of the Netherlands and France. I told her that I studied Sociology and that I was specializing in research methods to develop generalizable theories of social processes. Walking along the very romatic canals of Utrecht she told me that the historical approach is very different. One tries to describe the unique events that happened. I argued that you always use concepts when you describe something, for example it was a " governes " with "much or little power" and a "friendly way of communicating"  etc.
We did not finish the discussion before we came to the student flat but we liked the discussion because it showed that we both were interested in our scientific work and liked to talk about it. That also seldom happened in the student circles I participated in Utrecht.
But  first we had to take care of the new room for her stay in utrecht. It was a nice room  in a house for female students only which created problems as we will see later.  in this way we stayed in contact and now we are still  together
SOCIOMETRIC RESEARCH FOUNDATION