In panel studies the same type of screens can also be used to reduce considerably the work for the respondents. De Pijper and Saris (1986) developed for this purpose a procedure which they have called a dynamic SC screen. This procedure consists of the following steps:
​
1. Data needed repeatedly in different interviews is stored in variables.
2. After each interview these variables with their values are stored in a file that can be used in the next interview
3. In the next interview the variables are presented in an SC screen .
4. The respondent is asked whether this information is still correct.
5. If the answer is yes  with one click the data is stored for the next interview
6. If the answer is no the respondent is asked to indicate what has been changed
7. After that, in one or more questions he can introduce the changed information and this information is stored

The annoying  work concerning these repeated questions is considerably reduced  for the respondent unless everything has been changed.  A typical example of such a dynamic SC screen is presented below. 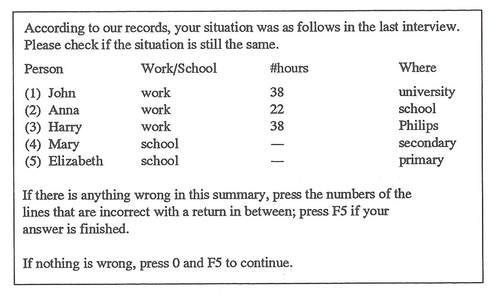 A dynamic SC screen as created with Interv for household information
All the information about the names, work or school, number of hours work and the organization were storied in variables that were transferred by files from one survey to the next. It will be clear that the first requirement for this approach is that this information was correct when it was collected in the previous interview. If that is the case and nothing has been changed the gain in response time is considerable for the respondent. In a panel the questions about  this information are not the ones the respondents like a lot so if the response time can be reduced this is a big advantage. Given the reduction of effort for the respondents, one can also expect that they are more willing to take the time to make the necessary corrections. With some experience with such panel research they will also realize that they otherwise may get problems with later questions.

As a last remark about this procedure  we would like to say that this procedure can be used for any kind of information, for example also for income and expenditure data. It is in that case less certain that the information given at the previous interview is still correct. This issue was discussed ​ in a previous section under the heading range and consistency checks.