Next, we discuss the model where a complex concept measured by a composite score Ycs shares the same method with an additional simple concept (Fa). Since we have derived in the a previous section the effect of the concept on interest (F) and the method M on the computed composite score of the complex variable F we can simplified this model as presented in the Figure below. 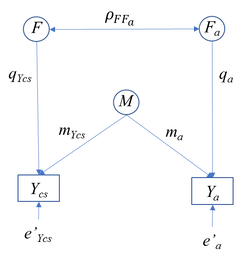 In order to compute the covariance between a complex concept and a simple concept the correlation between the two variables has to be multiplied with the standard deviations of these variables corrected for measurement error. This means that

For any complex concept the standard deviation is equal to qYcsσYcs which was derived before.